I have wrote, blogged and re-blogged about market manipulation, I believe with conviction that all markets are manipulated and statistics on inflation, GDP and employment are not representative or true. If they were, inflation would be 6% plus, unemployment would be double and GDP numbers would prove we are in a depression.

Cui bono? Our illustrious leaders of course, if Gidion Osborne, David ‘Never worked a full day in my life’ Cameron and William ‘War Criminal’ Hague had to stand in front of the British public with representative statistics, heads would roll…literally. Not forgetting that the wealth transfer, happening through quantitative easing, would end and the banks would fail due to being completely insolvent. Courtesy of Money Week:

I wrote here a few weeks ago about the oddly opaque manner in which the government figures out what inflation-adjusted GDP growth in the UK is. It doesn’t use the RPI or the CPI as a representative of inflation – as you might think they would – instead, it uses its own deflator. I have no idea how that is calculated, and I strongly suspect that almost no one else does either. The key point to note is that until 2010 the RPI and the deflator were much of a muchness. But in the last few years, they have suddenly (and to my mind inexplicably) parted ways. James Ferguson at MacroStrategy Partners has kindly picked this point up for me and produced this chart: 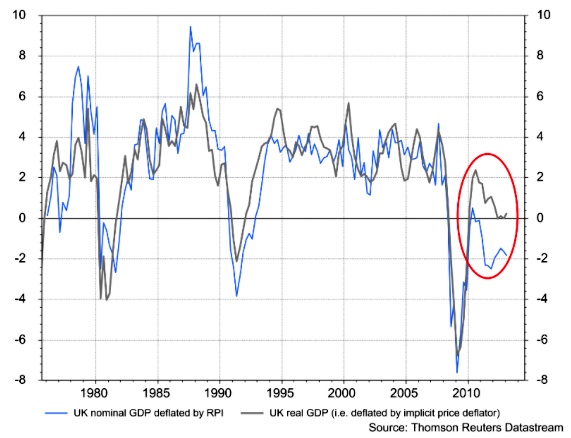 If you assume that the Office for National Statistics’ occult calculations for the deflator are entirely reasonable and correct, the UK has avoided a double dip recession (hooray!). If, on the other hand, you note that the deflator and the RPI have rarely diverged in the past, and so think that using the RPI to deflate nominal GDP continues to make perfect sense, it turns out that the real economy has been contracting since 2008 (boo!).

That’s not a double dip. It is a depression.