Political scientist Erica Chenoweth used to believe, as many do, that violence is the most reliable way to get rid of a dictator. History is filled, after all, with coups, rebellions and civil wars. She didn’t take public protests or other forms of peaceful resistance very seriously; how could they possible upend a powerful, authoritarian regime?

Then, as Chenoweth recounts in a Ted Talk posted online Monday, she put together some data and was surprised by what she found. “I collected data on all major nonviolent and violent campaigns for the overthrow of a government or a territorial liberation since 1900,” she says — hundreds of cases. “The data blew me away.”

Here’s her chart, which pretty clearly suggests that nonviolent movements are much likelier to work: 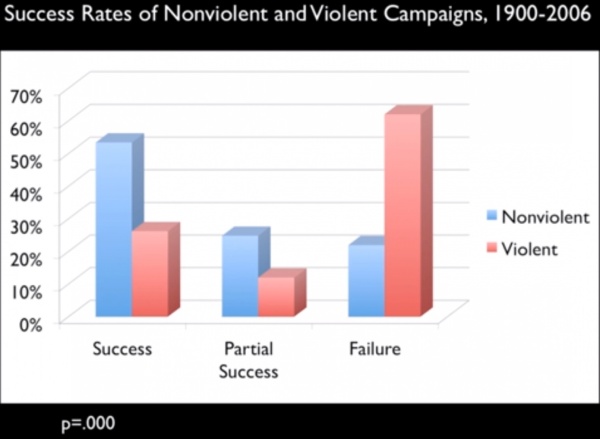 And that trend is actually “increasing over time,” Chenoweth adds. “Nonviolent campaigns are becoming increasingly successful.” Below is a chart of the successful campaigns from 1940 to 2006. 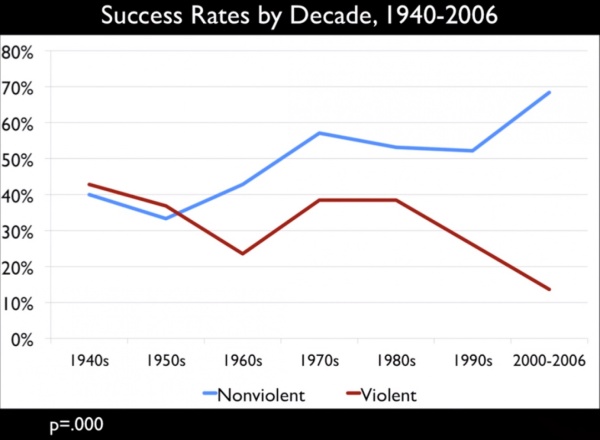 The data actually show a big rise in violent successes in the 1970s and ’80s, perhaps a product of both decolonization — the departure of European powers from sub-Saharan Africa was followed by a number of violent conflicts over power — and the Cold War, in which U.S. and Soviet backing might have helped push rebel movements toward success. But that trend has been reversed significantly since the end of the Cold War, with nonviolent successes way up.

“Researchers used to say that no government could survive if just 5 percent of the population rose up against it,” Chenoweth says. “Our data shows the number may be lower than that. No single campaign in that period failed after they’d achieved the active and sustained participation of just 3.5 percent of the population.” She adds, “But get this: every single campaign that exceeded that 3.5 percent point was a nonviolent one. The nonviolent campaigns were on average four times larger than the average violent campaigns.”

Of course, 3.5 percent is a lot of people. In, for example, Iran, it amounts to 2.7 million people. In China, it’s 47 million people. Still, it does happen. It’s not clear exactly how many Egyptians protested in the February 2011 uprising that led to President Hosni Mubarak’s downfall, but meeting the 2.9 million threshold doesn’t sound unlikely.

Chenoweth focuses a lot of her talk on the importance of getting 3.5 percent of the population to protest in order to bring down a government and why nonviolent resistance is the best way to do that. I’d argue that the things that make nonviolence more effective than violence go beyond the question of which is better at getting more people into the streets.

I did my master’s thesis on government crackdowns on popular uprisings, which involved a lot of looking at these same phenomena. To be clear, I don’t have anything approaching Professor Chenoweth’s expertise, and I looked at only about 30 cases compared to her “hundreds.” Still, I did find a few things that back up her argument that nonviolent resistance is more effective.

One thing I found is that an uprising becomes about 50 percent more likely to fail if it turns to violence. It seems to be the case that once protesters pick up guns, it legitimizes the state’s use of overwhelming violence in response. In other words, security forces are much more likely to open fire — and individual police or soldiers are much more likely to follow that order — if the opposition is shooting at them. That’s a human reaction, since people don’t like to be shot at, but it also matters for the government’s internal politics. Uprisings can often cause a crisis of legitimacy within the government, particularly if the relationship breaks down between the head of state and the military and/or security forces, which can in turn cause that government to fall. The more violent the uprising, the more likely that it will internally unify the regime.

Keep in mind that the state almost always has the military force at its disposal to crush just about any uprising. This is particularly true since the end of World War I, after which most states acquired tanks, machine guns and other tools that almost no rebel group could match on the battlefield. I found that an uprising is half as likely to succeed if the military intervenes directly and that this far less likely to happen if the uprising remains nonviolent.

Using violence also tends to reduce public support for an uprising. Chenoweth thinks this is because a violent uprising is more physically demanding and dangerous and thus scares off participants, but I’d add that violence is controversial and can engender sympathy for police and soldiers at the other end of dissidents’ rifles. A violent uprising can end up polarizing people in support of the government, whereas a government crackdown against a nonviolent uprising will often reduce public support for the regime.

Chenoweth goes on to make an important point: Violent resistance movements, even if they do succeed, can create a lot of long-term problems. “It turns out that the way you resist matters in the long run, too,” she says, explaining that her data suggest that countries with nonviolent uprisings “were way more likely to emerge with democratic institutions.” They were also 15 percent less likely to “relapse” into civil war. After all, a nonviolent movement is often inherently democratic, a sort of expression of mass public opinion outside of the ballot box. A violent movement, on the other hand, no matter what its driving ideals, is all about legitimizing power through force; it’s not hard to see how its victorious participants would end up keeping power primarily through violence, as well.

This is all still a developing field, of course, and something as complicated as a popular uprising could never be wholly predicted by a single variable. Even if most violent uprisings fail, some do succeed, so it’s not a hard-and-fast rule that nonviolent movements are always better. For more, do read “Why Civil Resistance Works,” co-authored by Chenoweth and Maria Stephan.