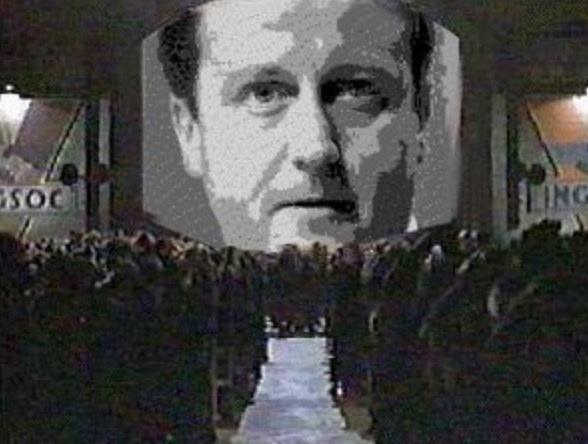 It’s a fairly amazing speech where Cameron can — within just a few sentences — both argue for the rule of law and that obeying the rule of law should not keep you out of trouble.

Earlier this week, the Queen gave her traditional “Queen’s Speech” which lays out the legislative agenda for the new Parliament, and it went quickly down the Orwellian path as well. Apparently, suppressing free speech and civil liberties will be done in the name of mandatory “social cohesion.”

Measures will also be brought forward to promote social cohesion and protect people by tackling extremism. New legislation will modernise the law on communications data, improve the law on policing and criminal justice, and ban the new generation of psychoactive drugs.

That first sentence is about the extremism orders, but the second part may be even more troubling. It’s the Queen making it clear that the Snooper’s Charter is returning — but even worse than before. If you don’t recall, the UK government has been trying to pass this bill that would grant the government massive surveillance powers. David Cameron insists this is necessary because he’s seen it work on fictional crime shows that he watches on TV (really). The last major attempt to push this through failed thanks to then Deputy Prime Minister Nick Clegg blocking it. But with Clegg out of the way following the last election, the government is going for the gold in pushing for an even broader Snooper’s Charter including mandatory backdoors into encryption:

In a surprise move, the government is to introduce an investigatory powers bill far more wide-ranging than expected. The legislation will include not only the expected snooper’s charter, enabling the tracking of everyone’s web and social media use, but also moves to strengthen the security services’ warranted powers for the bulk interception of the content of communications.

Of course, as we’ve been discussing for quite some time now, such backdoors into encryption are monumentally stupid and counterproductive. They weaken the security and privacy of everyone. And, of course, we’ve already discussed how once one country demands its own backdoors, others will want them as well. And, of course, such backdoors always come back to bite everyone by opening up avenues for malicious and nefarious attacks — no matter how often law enforcement insists that it can keep things safe. You are, by definition, opening up a vulnerability. And it will lead to less safety and security.