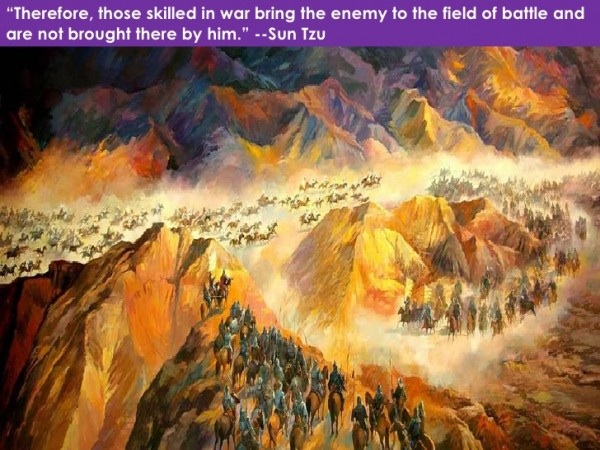 After publishing the article which detailed the frightening extent to which the globalist super-weapons have reached, the display of resistance was admirable, but misguided. On their own, the American people cannot fight the globalists on their terms and expect to prevail. David did not engage Goliath on Goliath’s terms. David employed a weapon at a relatively safe distance. If David had been within an arms length of Goliath, David would have been destroyed. In the same light, if one thinks that they are going to successfully engage a Micro Aerial Vehicle in their driveway armed with their 12 gauge shotgun and win, that person is both naive and mistaken. This is not to suggest that Americans should not be prepared to fight against the unfolding and unprecedented levels of tyranny that we will be dealing with in a short amount of time.

No military coup has even been successful in the long run, in the complete overthrow of a powerful and tyrannical government, without the popular support of the people. In that regard, we the people still hold the power in this situation and may ultimately decide the final outcome.

If one thinks they are going to engage the coming “Killer Robots” in their doorway and win a majority of these confrontations, then that person clearly does not understand either technology and/or military strategy. Conversely, no grass-roots revolution led by the people will ever be successful without the overwhelming assistance from the military. The globalists control every single pressure point of military power. The only way to unseat that power is to get the military to change sides and join with the people. We nearly had that moment at Benghazi. However, the military learned a very painful lesson when General Hamm and his colleagues were stopped from rescuing Ambassador Stevens and exposing the criminality of this administration to the public. When Hamm et al were arrested, most of the people of this country were unaware of what was at stake and failed to speak up and subsequently act. The military will not likely make this kind of move again without the support of the public. END_OF_DOCUMENT_TOKEN_TO_BE_REPLACED

Everyone seems to be eager to pin the blame for the Sony hack on North Korea. However, I think it’s unlikely. Here’s why:1. The broken English looks deliberately bad and doesn’t exhibit any of the classic comprehension mistakes you actually expect to see in “Konglish”. i.e it reads to me like an English speaker pretending to be bad at writing English.

2. The fact that the code was written on a PC with Korean locale & language actually makes it less likely to be North Korea. Not least because they don’t speak traditional “Korean” in North Korea, they speak their own dialect and traditional Korean is forbidden. This is one of the key things that has made communication with North Korean refugees difficult. I would find the presence of Chinese far more plausible.See here – http://www.nytimes.com/2006/08/30/world/asia/30iht-dialect.2644361.html?_r=0

This change in language is also most…

Since the 1800s, corporations have been a very popular method of organizing large pools of capital into cohesive economic entities. Today, corporate entities do everything from charity work to making computers for a profit and control huge swathes of the economy.

In order to allow corporations to function in the United States, corporate entities have been granted a degree of personhood that allows them to function in the market and the courts. The 1819 Supreme Court case Trustees of Dartmouth College v. Woodward enshrined the rights of corporations to enter into contracts as though they were actual people and ensuing Supreme Court decision have only expanded these rights.

Unfortunately, it appears that a confluence of legislative, executive and judicial events may result in American law dramatically altering its classification of corporations in a way that increases their power.

Under the 2010 Supreme Court case

It boils down to a choice. To consent or not.

Before Obama made his Amnesty speech last Thursday I thought of The Cask of Amontillado by Edgar Allan Poe. One brick after another sealed the fate of an unsuspecting murder victim in Poe’s classic mystery story. We could all benefit if we began to interpret every action of the New World Order as part of an elaborate step by step scheme to kill the majority of Americans and to reduce the remaining survivors to Debt Slavery.

We need to define the term NWO before we explain their plans to exterminate at least 5 to 6 billion people. I guarantee you that many of those billions of human beings look a lot like you and me. Some of us might even be on the US government’s secretive Main Core list of people to be Disappeared the night before Bankers see people with pitchforks in the streets. This means that the Bankers…

We are living in an illusion, all data, markets and prices are manipulated and driven by behaviourist ideals. You can only ignore reality for so long, that is until it kicks you in the balls when you’re not looking.

The BLS uses HQA to evaluate a new product using the pricing relationships that existed in the past to value what the new product would have cost in the past. Setting aside the myriad of fundamental arguments one could make against this process, lets look at a bonafide statistical pitfall that Hedonic Quality Regression (HQR) fails to address. At best this introduces a bias into the CPI, and at worst renders the prices used completely misleading.

However, technology has a tendency to create things we have never seen before. We can all find a point where a technology we take for granted today didn’t exist in the past…

Cost-of-living adjustments increase entitlement spending automatically every year. Most COLA’s use all or part of the CPI to calculate inflation. The US further embeds the CPI in the system by indexing a growing portion of its government debt via TIPs. Even welfare benefits like food stamps use applicable indices within the all-items CPI to calculate COLA. 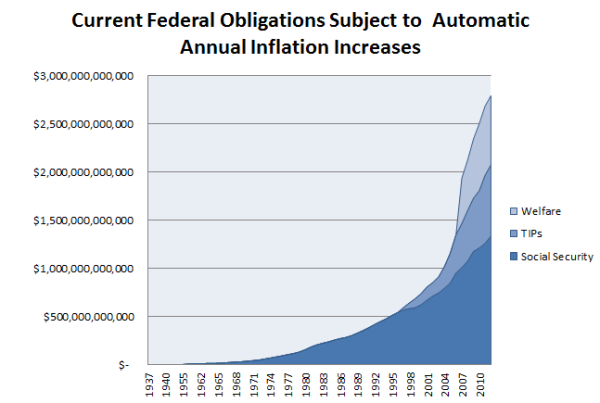 This time series represents the majority of yearly federal obligations that are subject to inflation-based COLA increases. We can thus attempt to calculate how much the government saved…

Have you heard the one about CPI?

Suppose that a TV manufacturer retires a product and replaces it with a newer, better, and much more expensive one. If the new TV costs 5 times more than the old one, how can we gently massage the price of the old TV to make it look like the price fell? By using the dark arts of econometrics, my son!

If you believe the public comments made by the world’s central bankers, the prices that consumers pay for items are not rising fast enough; in some places like Europe they worry that prices might actually fall (a tragedy for the possessing classes, as their manic one-way long bets might not work then). Central bankers are terrified of this outcome. Setting aside for a second the apparent insanity of this logic for your average consumer, who experiences price rises on a near continuous basis, let’s examine…