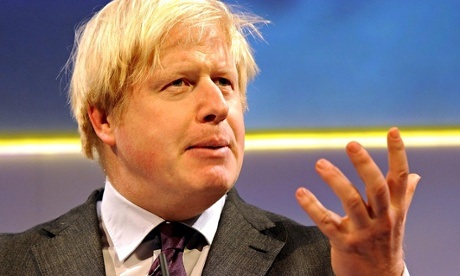 Boris Johnson has called for the supposed British jihadi to be killed. Photograph: John Stillwell/PA

Courtesy of The Guardian:

Boris Johnson has called for the presumption of innocence to be reversed in cases where Britons travel to Iraq or Syria and said he wants the jihadist who beheaded an American journalist to be killed in a bomb attack.

The Mayor of London, who has overall responsibility for the Metropolitan Police, said legislation should be introduced so that anyone visiting those countries would be automatically presumed to be terrorists unless they had notified the authorities in advance, and joined growing calls for Britons fighting abroad to be stripped of their citizenship.

Johnson said Britain must take on the Islamic State (Isis) and “try to close it down now”, warning that doing nothing would mean a “tide of terror will eventually lap at our own front door”.

British intelligence agencies are close to identifying the killer of US journalist James Foley who has been dubbed “jihadi John”, according to the UK’s ambassador to the US, Sir Peter Westmacott.

Writing in his Daily Telegraph column, Johnson said most Britons wanted “someone to come along with a bunker buster” and kill the man, reported to be British, “as fast as possible”.

Johnson said those who “continue to give allegiance to a terrorist state” should lose their British citizenship and called for a “swift and minor change” to the law so there was a “rebuttable presumption” that those visiting war areas without notifying the authorities had done so for a terrorist purpose. END_OF_DOCUMENT_TOKEN_TO_BE_REPLACED