Courtesy of Koos Jansen @ In Gold We Trust:

As we can see power shifting from West to East on a daily basis at the current time of writing, in the fourth quarter of this year the Shanghai Gold Exchange (SGE) will launch an international board in the Shanghai Free Trade Zone (FTZ) for investors worldwide to trade gold spot contracts denominated in renminbi. The purpose being is becoming not only the world’s primary physical gold market but also increase pricing power and internationalize the renminbi.

Shortlist of recent developments regarding the rising powers in the East:

A Provisional Introduction To The Shanghai Gold Exchange International Board

Currently I don’t have any official documentation on the launch of the SGE international board, but by reading media (one, two, three, four) and from a source in the mainland, this is what I understand of it at this point: China’s central bank, the Peoples Bank Of China, has given approval to the SGE to set up a subsidiary company called the Shanghai International Gold Trading Center to operate the international board. The SGE is currently working on member recruiting, including commercial banks, gold producing companies and investment funds. Allegedly HSBC, ANZ, Standard Bank, Standard Chartered and Bank of Nova Scotia are to take part in the global trading platform. END_OF_DOCUMENT_TOKEN_TO_BE_REPLACED

While the US government plans towards the next election, China is planning for the next 100 years and the plan…it’s golden. Courtesy of Steven Roach @ Project Syndicate

Yes, the United States dodged another bullet with a last-minute deal on the debt ceiling. But, with 90 days left to bridge the ideological and partisan divide before another crisis erupts, the fuse on America’s debt bomb is getting shorter and shorter. As a dysfunctional US government peers into the abyss, China – America’s largest foreign creditor – has much at stake.

It began so innocently. As recently as 2000, China owned only about $60 billion in US Treasuries, or roughly 2% of the outstanding US debt of $3.3 trillion held by the public. But then both countries upped the ante on America’s fiscal profligacy. US debt exploded to nearly $12 trillion ($16.7 trillion if intragovernmental holdings are included). And China’s share of America’s publicly-held debt overhang increased more than five-fold, to nearly 11% ($1.3 trillion) by July 2013. Along with roughly $700 billion in Chinese holdings of US agency debt (Fannie Mae and Freddie Mac), China’s total $2 trillion exposure to US government and quasi-government securities is massive by any standard.

China’s seemingly open-ended purchases of US government debt are at the heart of a web of codependency that binds the two economies. China does not buy Treasuries out of benevolence, or because it looks to America as a shining example of wealth and prosperity. It certainly is not attracted by the return and seemingly riskless security of US government paper – both of which are much in play in an era of zero interest rates and mounting concerns about default. Nor is sympathy at work; China does not buy Treasuries because it wants to temper the pain of America’s fiscal brinkmanship. END_OF_DOCUMENT_TOKEN_TO_BE_REPLACED

Courtesy of The Economic Collapse blog:

On the global financial stage, China is playing chess while the U.S. is playing checkers, and the Chinese are now accelerating their long-term plan to dethrone the U.S. dollar.  You see, the truth is that China does not plan to allow the U.S. financial system to dominate the world indefinitely.  Right now, China is the number one exporter on the globe and China will have the largest economy on the planet at some point in the coming years.

The Chinese would like to see global currency usage reflect this shift in global economic power.  At the moment, most global trade is conducted in U.S. dollars andmore than 60 percent of all global foreign exchange reserves are held in U.S. dollars.  This gives the United States an enormous built-in advantage, but thanks to decades of incredibly bad decisions this advantage is starting to erode.  And due to the recent political instability in Washington D.C., the Chinese sense vulnerability.  China has begun to publicly mock the level of U.S. debt, Chinese officials have publicly threatened to stop buying any more U.S. debt, the Chinese have started to aggressively make currency swap agreements with other major global powers, and China has been accumulating unprecedented amounts of gold.  All of these moves are setting up the moment in the future when China will completely pull the rug out from under the U.S. dollar. END_OF_DOCUMENT_TOKEN_TO_BE_REPLACED

The price of gold dropped recently and have led many to believe that gold is in a bear market. The issue was that 500 tonnes of paper gold were dumped onto the market, causing a dramatic fall in price.

Courtesy of Bloomberg prices plunged 14 percent in the two sessions to April 15, the most since 1983, and reached a low of $1,321.95 an ounce on April 16. Since then, spot bullion has rebounded 11 percent to $1,469.54 today as the surge in physical demand offset record outflows from exchange-traded products.

In Turkey, the fourth-biggest gold consumer last year, bullion on the Istanbul Gold Exchange traded at premiums of as much as $25 an ounce over the London spot price, something that hasn’t happened in “a very long time, we’re talking years,” said MKS’s Panizzutti. “In the gold souk, you see some coins left over, but the investment bars are all gone from the windows,” said Schubert at Dubai-based Emirates NBD, the United Arab Emirates’ second- biggest bank by assets. Domestic retail prices moved to a premium of about $5 an ounce from a small discount before the rout, said Schubert, who has traded the metal since 1979.

What the mainstream media neglects to tell you is that the physical demand from China and Russia, domestic as well as from the central banks is growing continually. The smack down of the gold, led by the dumping of paper gold, has caused a buying frenzy all across the East. Even the American mint has minimum 4 week wait on new sliver eagles. Perth mint is working at 100% capacity and working over weekends to meet demand. 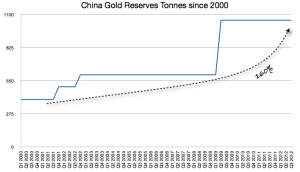 According to Jim Rickards, author of Currency Wars which is a great read, states that Chinese gold holdings are massively understated as are Russia’s. They are waiting for the US Dollar to lose its reserve currency status and then they will back their own currency, the Renmimbi, with gold. This also links into the new BRICS development bank which is being put into place to rival the IMF and the World Bank, which are insolvent anyway.

Back to Bloomberg…Dubai is the largest gold-trading center in the Middle East, according to the Dubai Gold & Jewellery Group, an industry body that includes manufacturers and retailers. Trade was worth about $56 billion in 2011, up from $6 billion in 2003, according to data on the Dubai Multi Commodities Centre website.
Gold jumped 4.2 percent last week, the most in 15 months, as coin demand from mints in the U.S. and Australia to the U.K. soared. The volume for the benchmark contract on the Shanghai Gold Exchange surged to a record last week, while premiums to secure supplies in India jumped to five times the level before the slump. China and India are the world’s largest buyers.
Consumers in Singapore and Hong Kong are paying premiums of about $3 an ounce, compared with about $2 just after the rout, according to Ng Cheng Thye, head of precious metals at Standard Merchant Bank (Asia) Ltd.

So why is physical gold or silver a good investment? It has been used as a currency or money for 3000 years. Fiat currency never lasts longer than 50 years. Gold and silver have intrinsic value as there is a limited amount that can be mined and it costs ‘money’ to get it out of the ground and it has no counter party risk. By that I mean if you are holding the gold in your hand, no one can default on paying you that, unlike paper gold and silver or ETF’s. It is also a good hedge against inflation…that is if the markets were free and statistics are reported correctly, which they are not.

If you are interested in adding gold or silver to your portfolio, The Gold Bullion, Celticgold or Bullionvault are worth a look. Celticgold does not add VAT to silver orders so you could save some money there.