Courtesy of Damien Carrington @ The Guardian:

Fossil fuel companies are benefitting from global subsidies of $5.3tn (£3.4tn) a year, equivalent to $10m a minute every day, according to a startling new estimate by the International Monetary Fund.

The IMF calls the revelation “shocking” and says the figure is an “extremely robust” estimate of the true cost of fossil fuels. The $5.3tn subsidy estimated for 2015 is greater than the total health spending of all the world’s governments.

The vast sum is largely due to polluters not paying the costs imposed on governments by the burning of coal, oil and gas. These include the harm caused to local populations by air pollution as well as to people across the globe affected by the floods, droughts and storms being driven by climate change.

US taxpayers subsidising world’s biggest fossil fuel companies
Nicholas Stern, an eminent climate economist at the London School of Economics, said: “This very important analysis shatters the myth that fossil fuels are cheap by showing just how huge their real costs are. There is no justification for these enormous subsidies for fossil fuels, which distort markets and damages economies, particularly in poorer countries.”

Lord Stern said that even the IMF’s vast subsidy figure was a significant underestimate: “A more complete estimate of the costs due to climate change would show the implicit subsidies for fossil fuels are much bigger even than this report suggests.”

The IMF, one of the world’s most respected financial institutions, said that ending subsidies for fossil fuels would cut global carbon emissions by 20%. That would be a giant step towards taming global warming, an issue on which the world has made little progress to date. END_OF_DOCUMENT_TOKEN_TO_BE_REPLACED

Courtesy of George Monbiot @ The Guardian:

Bring out the violins. The land reform programme announced last week by the Scottish government is the end of civilised life on Earth, if you believe the corporate press. In a country where 432 people own half the private rural land, all change is Stalinism. The Telegraph has published a string of dire warnings – insisting, for example, that deer stalking and grouse shooting could come to an end if business rates are introduced for sporting estates. Moved to tears yet?

Yes, sporting estates – where the richest people in Britain, or oil sheikhs and oligarchs from elsewhere, shoot grouse and stags – are exempt from business rates, a present from John Major’s government in 1994. David Cameron has been just as generous with our money: as he cuts essential services for the poor, he has almost doubled the public subsidy for English grouse moors, and frozen the price of shotgun licences, at a public cost of £17m a year.

But this is small change. Let’s talk about the real money. The Westminster government claims to champion an entrepreneurial society of wealth creators and hardworking families, but the real rewards and incentives are for rent. The power and majesty of the state protects the patrimonial class. A looped and windowed democratic cloak barely covers the corrupt old body of the nation. Here peaceful protesters can still be arrested under the 1361 Justices of the Peace Act. Here the Royal Mines Act 1424 gives the crown the right to all the gold and silver in Scotland. Here the Remembrancer of the City of London sits behind the Speaker’s chair in the House of Commons to protect the entitlements of a corporation that pre-dates the Norman conquest. This is an essentially feudal nation.

It’s no coincidence that the two most regressive forms of taxation in the UK – council tax banding and the payment of farm subsidies – both favour major owners of property. The capping of council tax bands ensures that the owners of £100m flats in London pay less than the owners of £200,000 houses in Blackburn. Farm subsidies, which remain limitless as a result of the Westminster government’s lobbying, ensure that every household in Britain hands £245 a year to the richest people in the land. The single farm payment system, under which landowners are paid by the hectare, is a reinstatement of a medieval levy called feudal aid, a tax the vassals had to pay to their lords. END_OF_DOCUMENT_TOKEN_TO_BE_REPLACED

The world we live in is not what is taught in schools and universities or shown in the paper or on TV. It is really topsy turvy, upside down and inside out. Austerity is a lie, it is an ideology used to repress and control the population, much like the monetary, legal and political systems. Government, regardless of colour or flavour has encouraged a dependency on the state but its not the work shy or lazy who receive favourable tax breaks, regulation or subsidies, it’s the corporations and they don’t want you to know. Straight from Wiki:

Fascism’s theory of economic corporatism involved management of sectors of the economy by government or privately controlled organizations (corporations). Each trade union or employer corporation would, theoretically, represent its professional concerns, especially by negotiation of labour contracts and the like. This method, it was theorized, could result in harmony amongst social classes. Authors have noted, however, that de facto economic corporatism was also used to reduce opposition and reward political loyalty.

One of the primary topics on this website since it was launched has been the extremely destructive and explosive rise of crony capitalism throughout the USA. It is crony capitalism, as opposed to free markets, that has led to the gross inequality in American society we have today. Cronyism for the super wealthy starts at the very top with the Federal Reserve System, which consists of topdown economic central planners who manipulate the money supply and hence interest rates for the benefit of the financial oligarch class. It then trickles down through lobbyist money into the halls of Washington D.C., and ultimately filters down to local governments and then the average person on the street gaming welfare or disability.

As such, we now live in a culture of corruption and theft that is pervasive throughout society. One thing that bothers me to no end is when fake Republicans focus their criticism on struggling people who need welfare or food stamps to survive. They have this absurd notion that the whole welfare system doesn’t start with the multinational corporations and Central Banks at the top. In reality, it is at the top where the cancer starts, and that’s where we should focus in order to achieve real change. END_OF_DOCUMENT_TOKEN_TO_BE_REPLACED

Courtesy of The Guardian:

George Osborne quietly moved to kill off Britain’s renewable revolution in Wednesday’s budget as he stealthily enacted David Cameron’s rumoured call to his cabinet to kill off the “green crap”.

With such stealth that it went almost entirely unspotted by environmentalists and journalists, who were busy focusing on his move to reduce fossil-fuel energy costs for big business, Osborne at a stroke abolished a key tax break that has attracted hundreds of millions of pounds of private money to help build Britain’s green energy future.

Tucked away in the budget’s red book is an innocuous-looking line that Enterprise Investment Scheme (EIS) tax breaks will no longer be available for companies benefiting from the renewables obligation certificate (ROC) scheme or the renewable heat incentive (RHI).

Of these, the ROC scheme is the big one. It underlies all the big wind, solar and other renewable technologies in the UK. The EIS tax breaks are available to investors who put money into all sorts of start-up companies. Until now that has also included firms building wind and solar farms. Now, after royal assent to the legislation in July, it will not be. END_OF_DOCUMENT_TOKEN_TO_BE_REPLACED

It comes as no surprise that the UK government defers to powerful landowners, its aim is to take us back to a neo-feudal age where the powerful and wealthy rule over the proletariat. It’s working. Feeding the UK is an important job but the whole agricultural industry needs to be re-examined and made financially and ecologically sustainable. One topic George Monboit fails to mention is hemp, it is an amazing plant which strengthens soil through its root structure, requires very little looking after and puts nutrients back into the land. Not only are there hundreds, if not thousands of uses for hemp but it should be incorporated into crop rotation and would help build a new sustainable industry and market within the UK. With only 2% of UK land built on, it’s time for an open and honest debate. Courtesy of George Monboit @ The Guardian:

Just as mad cow disease exposed us to horrors – feeding cattle on the carcasses of infected cattle – previously hidden in plain sight, so the recent floods have lifted the lid on the equally irrational treatment of the land. Just as bovine spongiform encephalopathy (BSE) exposed dangerous levels of collusion between government and industry, so the floods have begun to expose similar cases of complicity and corruption. But we’ve heard so far just a fraction of the story.

I hope in this article to lift the lid a little further. The issues I’ve begun to investigate here – the corrupt practices and the irrationality of current policies – should unite both left and right in a demand for change. They should be as offensive to those who seek to curb public spending as they are to those who seek to defend it. 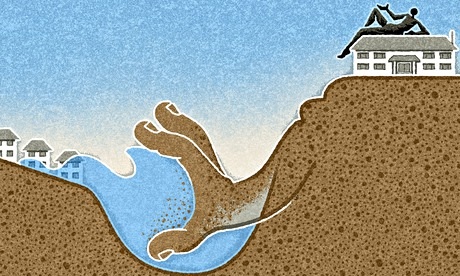 ‘So much erosion is caused by maize growing that a 10-hectare field causes run-off of 375m litres of water.’ Illustration: Matt Kenyon

In July 2013 the British government imposed a £26,000 cap on the total benefits a household can receive. In the same month it was pursuing a different policy in urgent discussions in Brussels: fighting tooth and nail to prevent the imposition of a proposed cap precisely 10 times that size (€300,000, or £260,000). The European commission wanted this to be as much money as a single farmer could receive in subsidies. The British government was having none of it.

It won, with the result that this measure is now discretionary – member states can decide whether or not to cap farmers’ benefits. Unsurprisingly, the British government has decided not to. The biggest 174 landowners in England take £120m between them. A €300,000 cap would have saved about £70m. If farmers were subject to the benefits cap that applies to everyone else (£26,000), the saving would amount to about £1bn. Why should a cap be imposed on the poor but not the rich? END_OF_DOCUMENT_TOKEN_TO_BE_REPLACED