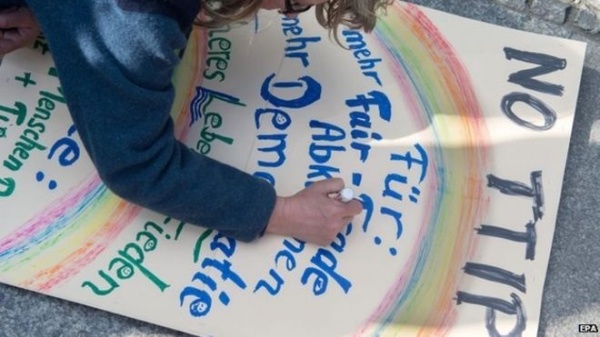 There’s one big issue for the new UK government that stayed below the radar during the election campaign – trade negotiations between the European Union and the United States, known as TTIP, the Transatlantic Trade and Investment Partnership.

The big political parties didn’t make much of it during the campaign. Both the Conservatives and Labour are broadly in favour, though the Greens are very critical. TTIP was however addressed in the manifestos. War on Want (who oppose the plans) have compiled the parties’ positions on the issue.

Outside the political arena there are some very strong opinions. Many business voices are enthusiastic, but there is also very vocal opposition.

What is TTIP and what is it for?

The Transatlantic Trade and Investment Partnership, or it will be if the negotiations are completed. The aim is to boost the economies of the EU and the US by removing or reducing barriers to trade and foreign investment.

President Obama said, when the talks were launched, that TTIP would promote “new growth and jobs on both sides of the Atlantic”. Critics reject that claim – more of that below. END_OF_DOCUMENT_TOKEN_TO_BE_REPLACED