Fiat is a perversion of value, it may act as a medium of exchange but it is conceived in deceit, backed by violence and reliant on the apathy, ignorance and insouciance of the slave population. There are no surviving long term fiat currencies that hold or behave as a store of value, they all have a 100% mortality rate in the long term but gold and silver on the other hand…as Mark Twain said: ‘It is easier to fool someone than convince them that they have been fooled’.

To clarify Gresham’s Law below that ‘bad money’ drives ‘good money’ out. By looking to the work of Carl Menger on hoarding and marketability, one can achieve a greater understanding of the errors in Gresham’s Law and by definition, bad and good are dualisms and bad money is not money! Courtesy of Peter Tenebrarum @ Acting Man:

Imagine three men living on a small island. Toni is mining the local salt mine, and apart from him there are Pete the fisherman and Tom the apple grower and their families. They have a barter trading system set up: Toni exchanges his salt for Pete’s fishes and Tom’s apples, who in turn exchange fishes and apples between each other.

One day Pete says: “I have an idea. Instead of fish, I will from now on give you pieces of papyrus with numbers marked on them”. Papyrus grows in great quantities nearby, but has so far not been of practical use to any of the islanders. Pete continues: “One papyrus mark will represent 1 fish or 5 apples or 2 bags of salt (equivalent to current barter exchange rates). This will make it easier for us to trade among ourselves. We won’t have to lug fishes, apples and salt around all the time. Instead, we can simply present the pieces of papyrus to each other for exchange on demand.”

In short, Pete wants to modernize their little island economy by introducing money – and he already has one of those new papyrus notes with him, which he is eager to trade for salt. However, the others would immediately realize that there is a problem: the papyrus per se is not of any value, since none of them have found a use for it as yet. If they were all to agree on using the papyrus as a medium of exchange, its value would rest on a promise alone – Pete’s promise that any papyrus he issues will actually be “backed” by fish, which would make Toni and Tom willing to accept it in exchange for salt and apples. END_OF_DOCUMENT_TOKEN_TO_BE_REPLACED

Ever since the ECB has introduced negative interest rates on its deposit facility, people have been waiting for commercial banks to react. After all, they are effectively losing money as a result of this bizarre directive, on excess reserves the accumulation of which they can do very little about.

At first, only a small regional bank, Deutsche Skatbank, imposed a penalty rate on large depositors – slightly in excess of the 20 basis points banks must currently pay for ECB deposits. It turns out this was a Trojan horse. Other banks were presumably watching to see if depositors would flee Skatbank, and when that didn’t happen, Commerzbank decided to go down the same road.

However, there is an obvious flaw in taking such measures – at least is seems obvious to us. The Keynesian overlords at the central bank who came up with this idea have failed to consider a warning Ludwig von Mises once uttered about the attempt to abolish interest by decree.

Obviously, the natural interest rate can never become negative, as time preferences cannot possibly become negative: ceteris paribus, consumption in the present will always be preferred to consumption in the future. Mises notes that if the natural interest rate were to decline to zero, all consumption would stop – we would die of hunger while investing all of our resources in capital goods, i.e., while directing all of our efforts and funds toward production for future consumption. This is obviously a situation that would make no sense whatsoever – it is simply not possible for this to happen in the real world of human action.

Mises warns however that if interest payments are abolished by decree, or even a negative interest rate is imposed by decree, owners of capital will indeed begin to consume their capital – precisely because want satisfaction in the present will continue to be preferred to want satisfaction in the future regardless of the decree. This threatens to eventually impoverish society and reduce it to a state of penury:

If there were no originary interest, capital goods would not be devoted to immediate consumption and capital would not be consumed. On the contrary, under such an unthinkable and unimaginable state of affairs there would be no consumption at all, but only saving, accumulation of capital, and investment. END_OF_DOCUMENT_TOKEN_TO_BE_REPLACED 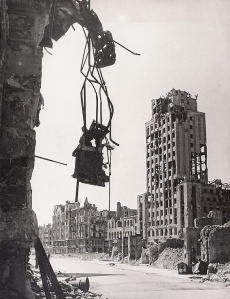 The 100th anniversary of the beginning of World War I seems like an ideal opportunity to spread a message of peace and economic cooperation; sadly, 2014 has so far been a year of new and renewed conflict far more than one of reconciliation.

By now, talk of the horrors of war is nothing new. Everyone knows about the total destruction war brings; in fact, we’ve known for millennia. As Lew Rockwell points out, “just about everyone makes the perfunctory nod to the tragedy of war, that war is a last resort only, and that everyone sincerely regrets having to go to war”—but war continues all the same. Even classical military strategists like Sun Tzu believed war should only be used only as a last resort, and argued that military campaigns could bankrupt states and ultimately, destroy them. Art of War actually states that “no country has ever profited from protracted warfare,” and cautions generals to “fight under Heaven with the paramount aim of ‘preservation.’” Yet as far back as we have historical records, these sorts of ideas have fallen on deaf ears among governments and military organizations alike.

Economics offers many insights into war making and why it persists, but the most fundamental explanation is an institutional one. It’s tragically simple: warnings about the horrors of war go unheeded because the power to make war—as well as “justify” it in the eyes of those forced to fight and finance it—lies in the hands of the state and its business and intellectual allies. States are monopolists of organized force, and as such decide when and how to use their power on a grand scale, especially when they wish to confront other monopolists. END_OF_DOCUMENT_TOKEN_TO_BE_REPLACED

As libertarianism begins to gain in popularity and seep into the youth culture, there is increasing pressure from certain strains of the movement to attempt to modify the theory and transform it into something that it is not.

To begin with, let us examine what is meant by the term “libertarian,” what its limits are, and what it attempts to explain. Libertarianism is exclusively a political philosophy describing the legitimate use of force in society. It claims that humans have the right of self-ownership, and that theft, assault and other forms of aggression violate this right, except in the case of legitimate self-defense against an aggressor. This is where the philosophy begins and ends, and although some libertarians dispute the circumstances under which force is acceptable (the Night Watchman state versus no state at all), it still has the legitimate use of force as its core.

It is not an economic philosophy, although its conclusion tends to support free market capitalism due to the lack of coercion inherent in such a system. Still, there is no dictum against collective ownership so long as it is voluntary. This is what anarcho-communism is all about.

Similarly, libertarianism has little to say about politics except for what follows directly from its central precept. Taxes are immoral because they involve coercion. Democracy is no better than dictatorship if it imposes the will of the many onto the few by force. And so on.

But because libertarianism has become fashionable among a certain segment of the population, and because we wish to expand the movement and convert others to it, there has been a push to expand this simple definition into a more holistic ethical code encompassing every aspect of life, almost akin to a religion. We are told that non-discrimination based on superficial characteristics like race and sex is an inherently libertarian position. It is not. So long as discrimination does not violate anyone’s rights of self-ownership, the theory simply has nothing to say about it (although we can observe that a capitalistic system is unlikely to encourage such behavior due to the way it tends to impact profits.) END_OF_DOCUMENT_TOKEN_TO_BE_REPLACED