The IMF had no credibility in the first place but feels it needs to go full blown idiocracy, it’s now all about the electrolytes. What the IMF is essentially saying, whether stupidly, disingenuously or both, is that it is better to be a perpetual debt slave than a free man with money in their pocket and control over their own destiny.

It would be too much to ask for the IMF to offer an alternative to a debt based monetary system, ironically and factually more debt is required for this Ponzi scheme to keep growing, otherwise it will collapse anyway. What the IMF will not admit is that the debts were created out of thin air so should be cancelled under a debt moratorium/jubilee, historical reference given to ‘The Shemitah’ where debts were cancelled every 7 years.

This regretfully will not happen as debt represents control (don’t want to give the slaves any ideas of what freedom actually is) and psychopaths like to control. Courtesy of Zerohedge:

On Tuesday we brought you what will likely be the first of many calls for so-called “Helicopter money”, whose advocates suppose that the reason printing trillions in fiat currency has not yet brought about the desired effects in terms of stoking aggregate demand and promoting robust economic growth is that central banks have yet to go the nuclear route by simply mailing out free money to everyone.

Here’s an excerpt from the Bloomberg View piece:

“Money isn’t a liability in the ordinary sense. Nothing is owed and nothing ever has to be paid back.”

As ridiculous as that sounds, it’s not exactly surprising in a debt-addicted world run by Keynesian central planners and indeed, it echoes recent calls by US lawmakers for the absolution of some $1.3 trillion in student debt.

Now, it appears the insanity has spread to the highest possible levels with none other than the IMF’s deputy director of research suggesting that when governments are faced with too much debt, they should consider simply not worrying about it.

In a new research paper, the IMF’s research department says that as long as countries can fund themselves at a reasonable cost via capital markets, they should consider simply “living with high debt”:

While some countries face debt sustainability constraints that leave them little choice, others are in the more comfortable position of being able to fund themselves at reasonable—even exceptionally low—interest rates. For these countries, there is a very real question of whether to live with high debt while allowing the debt ratio to decline organically through growth, or to pay it down deliberately to reduce the burden of the debt…

Next, the Fund says that if there’s still room to borrow, paying down debt makes no sense:

It only gets better when the suggestion is made that contrary to reality, paying down debt actually increases countries’ debt burden:

Distorting your economy to deliberately pay down the debt only adds to the burden of the debt, rather than reducing it.

But the real punchline comes when the team of economists moves to consider how heavily-indebted countries should respond to an exogenous debt shock:

With these preliminaries, we can turn to our question of interest: what happens if there is an exogenous increase in public debt?

It turns out that the optimal policy involves living with the debt forever.

The analytical framework implies that it is better to live with high debt than to pay it down.

Paging Greek PM Tsipras: may we suggest a new bargaining strategy in your negotiations with the IMF, because what we dubbed the Greek hell over the weekend, was really its heaven, at least according to the IMF. 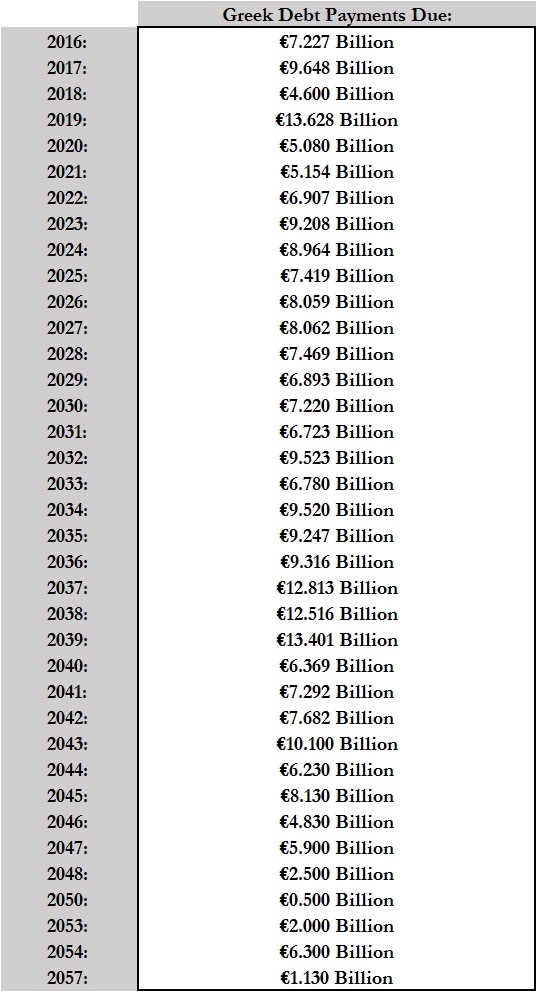